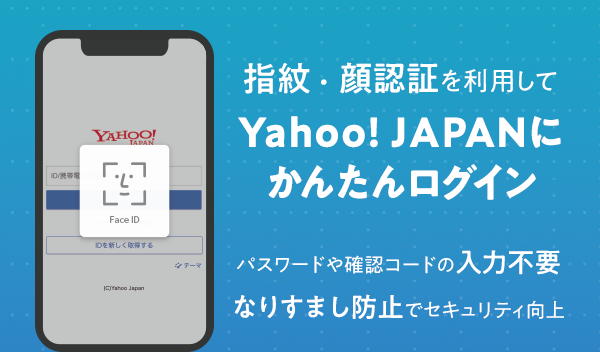 ■Comment from Mr. Andrew Shikiar, Executive Director, FIDO Alliance
As a key member of the FIDO Alliance, Yahoo! JAPAN has been promoting the standardization of FIDO authentication technologies in Japan and its early introduction into its services. I am very pleased to see the completion of the FIDO2-certified authentication to the iOS web browser, a first in the world for commercial services. I hope that Yahoo! JAPAN will continue to contribute to the development of authentication technology and its penetration among a large number of users.

*As a commercial consumer service

<How to Use Biometric Authentication>
[Apps]
The biometric login option can be enabled from the menu shown at the bottom of each app (“Others” > “Settings”) or from My Page. Please note that updates to supported versions of the app are required prior to use.

[Browsers]
The setting can be changed by accessing the following settings page of the smartphone browser:
- iOS (Safari) (Japanese only)
- Android (Google Chrome) (Japanese only)

If users have passwords from the past, to improve security, Yahoo! JAPAN recommends users to disable them when setting the biometric authentication.

■FIDO Alliance (external site)
The FIDO ("Fast IDentity Online") Alliance is a global industry association formed in July 2012 and officially launched in February 2013 with a mission to enhance both security and convenience in authentication. It addresses the lack of interoperability among robust authentication technologies and frees users from the problem of creating and remembering multiple usernames and passwords. By standardizing the FIDO authentication, which is open, scalable, interoperable, simple, and robust, FIDO works to reduce the reliance on passwords in user authentication and bring change to the fundamental nature of online services.